Ongoing Programs at the Library

What's On At The Library

Stay informed on our latest news!

Ongoing Programs at the Library

Please be aware that during the Covid-19 situation the Library is offering virtual programming. Check the What's On newsletter, our Event Calendar and this page for details.

Programs For All Ages

Port Hope Public Library's goal is to support extensive and comprehensive library programming and outreach that meets the diversity of needs in the community, and that supports the Library's collections and service mandate. The Library actively partners with other community agencies, organizations, educational and cultural institutions, or individuals to develop and present co-sponsored public programs. The Library's philosophy of open access to information and ideas extends to Library programming with all programs open to the public and largely offered free of charge.

Port Hope Public Library approaches programming with innovation and vision, which has been recognized provincially as the recipient for two consecutive years of the Ministry of Culture's Angus Mowat Award of Excellence in Public Library Service.

There are a wide variety of fun, informative and entertaining programs available at the library. See the details of the program by clicking on the title of program below.

Brenda read and enjoyed The Hidden Beach by Karen Swan

Ready to Come About by Sue Williams recommended by Lisa O

Watch for a new craft project each month

Please ask staff to put the craft kit on hold for you, you'll be notified when your kit is ready for pickup. Send us a picture of your finished project to have it posted to social media porthopepubliclibrary@gmail.com

Your kit will include all the elements to create your butterfly. You will need... glue, scissors and your artistic flair. Enjoy!

December 9, 2020 is the 60th Anniversary of  the debut of the world's longest running serial Coronation Street. We can’t get together in person to celebrate but we can discuss the 10,100+ episodes, the 90+ current cast members and all the touching, laughable and outrageous plot lines with our super fans. So check out these podcasts and hear Nicki, Jo-Anne and Deborah’s podcasts about all things Coronation.

For Adults Who Enjoy Being Read To - A Storytime for You

Tuesdays at 11 am on Northumberland 89.7 Local Radio

Authors Live is a radio program developed specifically for people living in seniors’ residences or those who are housebound. The live author volunteers in Authors Live are themselves seniors living in the Northumberland area. In the program they will read aloud a variety of material including extracts from their own writing and pieces from the writing of well-known authors, ranging from poems to short stories. Think of it as ‘story time’. All the material in the program is either in the public domain or copyright by the local authors.  All the episodes so far are available as podcasts at https://northumberland897.ca/authors-live. A partnership between 89.7, Cobourg Public Library and Port Hope Public Library.

Bonnie Foord reads The Cremation of Dan McGee by Robert W. Service, a poem describing the realities and ruggedness of life and friendship in the Yukon winter.

Chris Worsnop reads Three Ha’pence a Foot, by Marriott Edgar, a comic monologue poem about some of Noah’s troubles building his ark. The poem was made famous by British radio and film star, Stanley Holloway.

Ellen Curry reads a memoir about a family she has known for many years and uses their story to show that there are people who are angels through their caring and generosity during their life.

Chris Worsnop reads a shortened version of Charles Dickens’s A Christmas Carol. This story has to be the top favourite Christmas yarn of all time. We never tire of reading it, watching it or hearing it. So don’t miss getting your dose of Old Scrooge and Tiny Tim this Christmas.

Bonnie Foord reads another Christmas favourite, the poem The Night Before Christmas, by Clement Clarke Moore. The poem was first published anonymously in 1823, and it has become over almost 200 years one of the best-loved poems for the Christmas season. You will probably be able to recite it along with Bonnie.

Another Christmas in Flounder Falls

Our own Ed Greenwood has written another original Christmas story for 2020 The Year that Christmas Went Viral featuring the holiday antics of the citizens of Flounder Falls. How will Mayor Elias Busby, Fire Chief Roy Stickleback and Police Chief Brent Steelshaw cope with delivering Christmas presents and the Lodge Chirstmas Dinner during the pandemic? Tune in to listen. 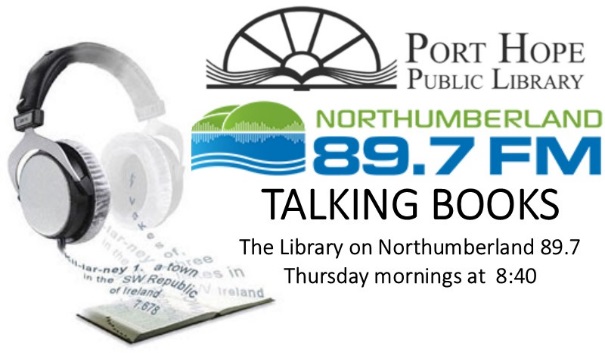 Northumberland 89.7 morning host Jim Glover and Library staff chat Thursday mornings at 8:40 am about Library resources, programs, and events. Listen to Truly Local Radio all about your public library.

Future of Port Hope Library service some of the same and something new. Podcast with CEO Margaret Scott and Robert Washburn on June 14, 2020

Mindful Mondays to Watch at your Leisure

Episode for Monday July 6, 2020 What is Mindfulness?